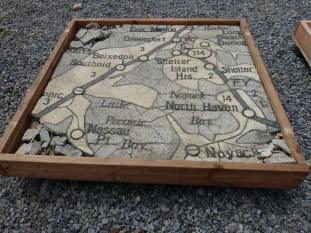 The world’s largest map is made out of colorful terrazzo. It appeared in the New York State Pavilion’s Tent of Tomorrow at the 1964 World’s Fair. This month marks the 50th Anniversary of that map and the World’s Fair.

I grew up in the Bronx, NY and, as a kid, visited the 1964 New York World’s Fair. Long before my long affair with terrazzo, the colorful terrazzo roadmap at the NY State Pavilion completely captured my imagination. Here’s that terrazzo story.

Governor Nelson Rockefeller hired architect Philip Johnson to design the NY State Pavilion at the 1964 World’s Fair in Flushing, NY. This was subsequent to Johnson’s design for the State Theater at Lincoln Center, an earlier job done for the State. The Pavilion was the largest structure at the Fair. It consisted of an oval-shaped, open air construction called the Tent of Tomorrow, a circular theater building called Theaterama and three Astro-View towers. The tallest of these towers stood 226 feet high. All of these structures still stand.­

The largest structure was the Tent of Tomorrow. This consisted of 16 concrete columns in oval plan, which supported a steel superstructure. One hundred feet up, cables supported multi-colored plexi-glass panels as its roof. The chief attraction at this huge assembly hall, which measured 250 feet x 320 feet, was its vast terrazzo roadmap. The map was 130 feet x 166 feet. It was sponsored by Texaco, the fuel retailing company, which has since been absorbed by Chevron. The terrazzo map showed, in scale, all 54,000 square miles of New York State. A group of Yale students projected a colorful Rand McNally map of New York onto template paper, and they meticulously traced all roads, placed names, and map symbols by hand. They included all Texaco gas station locations. The map consisted of 576 square precast panels, each 4 feet x 4 feet x 2 inches thick. Each weighed about 400 pounds. The cost, in 1964 dollars, was about $1 million.

The templates were sent to the Manhattan American Strip Company in Connecticut. They still exist, but are now in Staley, NC. They laid out all the divider strips and cut out plastic letters and numbers and did all the art work, which was assembled into 4-ft. square marine plywood boxes.

Port Morris Tile and Terrazzo of the Bronx, NY got the call to do the actual terrazzo precast work. The company still exists and does terrazzo work, but their primary focus today is natural stone. In accordance, they have changed their name to Port Morris Tile and Marble.

The terrazzo panels included interlocking hardware on the sides, and suction cups were used to lift them into position. They were bedded on sand over a concrete substrate. The entire map was supposed to be temporary with the idea being that at the end of the Fair, the precast panels would be removed and reassembled at a State building in Albany. This never occurred.

The terrazzo floor map was wildly popular. Six million people visited it. It has been called the first piece of public art to be commissioned.

While the rest of the Fair was demolished, the host New York State and New York City Pavilions were saved. The NYC Pavilion is now the Queens Museum, which still houses the sprawling scale model of New York City. Theaterama has been converted successfully into Queens Theater in the Park (adorably called Q-tip). The other structures have been neglected and ravaged by New York’s severe weather.

After the Fair, the Tent of Tomorrow with its terrazzo roadmap was used as a concert venue, then later as a skating rink, which probably helped degrade the terrazzo. The map was allowed to deteriorate over 50 years with no maintenance and some vandalism.

In an effort to prevent further deterioration, the terrazzo roadmap has now been covered with landscaping cloth with gravel placed on top.

Earlier this year, I contacted a group called People for the Pavilion. They would like to see restoration of the Pavilion and some adaptive reuse of the structures. I offered to give them an opinion on the status of the terrazzo at no charge, but they told me the site was under the control of the Parks Department. One of the group’s founders, Mathew Silva, is close to completing a film on the Pavilion called Modern Ruin, a World’s Fair Pavilion. At present there is a controversy between those who would like to see the hulking neglected structures demolished, and those who want to see restoration, which has been estimated to cost $70 million for all structures. Queensboro president Melinda Katz is in favor of restoration. In the recent past, the Pavilion has been placed on the National Register of Historic Places. This designation does not unilaterally mean that it may not be demolished.

I would still like to view the terrazzo map to give a pro bono opinion as to the possibilities for restoration. But based on the photographs that I’ve seen, I believe it may be too late to restore the world’s largest map in its entirety.

This entry was posted on April 30, 2014 by Terrazzo by Lorenzo. It was filed under Uncategorized .